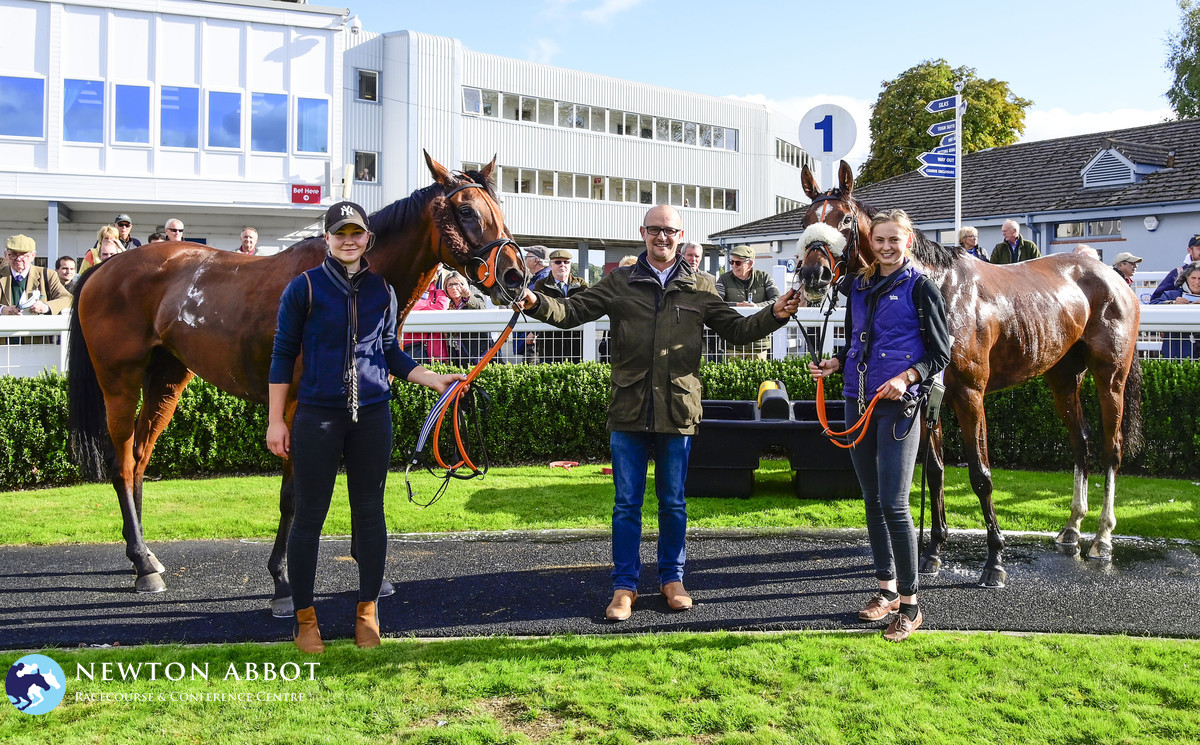 Some impressive fluent jumping by Hang In There, under Tom Bellamy, for trainer Emma Lavelle, took the first of two Class 3 races at Newton Abbot on Monday.

Tom Bellamy set the pace on Hang In There in the Pertemps Network Novices’ Chase over two-miles and five-furlongs. The Harry Cobden ridden Hell Red, made a bad error at the first fence which knocked Hell Red’s confidence throughout the race and was unable to challenge, but nursed around safely by Harry Cobden finishing second to Hang In There, who was able to follow up on his recent win at Market Rasen, enjoying what the jockey quoted “A steering job” winning the race by a distance again.

The opening Pertemps Network Conditional Jockey’s Selling Handicap Hurdle run over two and a quarter miles, went the way of the well-fancied Sufi trained by Milton Harris under jockey Bradley Harris who had taken instructions to run tucked away in mid field. The Pivotal-sired gelding, stayed on to battle out the finish with favourite Yaazaain, seeing Sufi win by a head, having been sent off at a value price of 9/2.

In the following Trevor Leslie Scheu Memorial Novice’s Hurdle which was run over three and a quarter miles, saw the popular Owners Group Syndicate clock up another winner with Paris Dixie, who made most under Rex Dingle for the Antony Honeyball team being sent off at 7/1. The favourite Present Storm, couldn’t stay the pace under top weight, with Paris Dixie’s nearest rival up the home straight being Wild Wilbur, being held into a 16-length second.

Jockey Gavin Sheehan rode a patient race to steel the following Novice’s Hurdle race on Sea The Clouds for the Jamie Snowden team. Robert Walpole was sent off favourite, and under Harry Skelton set a strong pace, but couldn’t stay the distance and faded over the second last. Sea The Clouds had survived a mistake over the first fence, with Gavin Sheehan taking up the running two out, to win by three and-a half-lengths, with Star of Valour under Brendon Powell staying on for second.

Sheehan was back in the winners enclosure in the following Mares Novice’s Handicap Hurdle run over two miles and five furlongs, giving trainer Keiran Burke, a legendary dead heat on the day. Sheehan was riding Height Of Fame and made most, travelling comfortably, with the only one to take them on over the last, was the favourite Marrochi under Harry Kimber. Trainer Keiran Burke was delighted with the outcome and quoted “We can’t split them at home”.

There were only four runners in the Douglas Roxburgh Big Six-0 Handicap Chase, with Coal Stock setting a good pace from the front to take on the favourite For Pleasure. However, it was the Mullins – team’s Romanor, who had been backed into second favourite, to repeat his form when winning here in August following his wind op. He stayed on well again, to take this race and score another impressive win under jockey Michael Nolan.

To close the day was the turn of jockey David Prichard to score his first win of the season, in the Pertemps Network RGB Handicap Hurdle, on the Claire Harris-trained Get A Lead, who had been backed into second favourite. The favourite Gaulois had been left some twenty lengths at the start being quirky, but jockey Tom Buckley gradually made up the distance they lost, and got up to only be beaten by a length, giving a thrilling finish to the day.

Racing returns to Newton Abbot for the final time this year on Saturday 15 October, with tickets ONLY being available for this fixture in advance. Tickets are on sale now, with a £2 saving on Paddock admission when booking in advance. Book Newton Abbot Racecourse Tickets